How To Stop Fighting With Your Spouse! 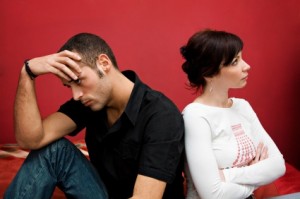 There are many reasons couples fight with one another. However, there is one common thread that runs through each of these fights and that is; one or both partners are feeling unheard, misunderstood, or slighted.

When you put it into this simple context it makes perfect sense as to why arguments ensue. So now having this information, how do you stop fighting with your spouse?

The first step is to refuse to give into the temptation of “being right.” When we seek first to prove that we are right and our partner is wrong, we are missing the chance to avoid the discord.
You see, when there are two people, there are two stories or perceptions of the circumstance. Each person is “right” because it is true for him or her.

If you have a married couple fighting about money, when we get to the core of the fight, he feels she is not respecting his hard work to make money and she feels he is trying to control her, then he and she are both right. When you approach your relationship from this point, it opens you up to the next step….

One person feeling as if they “won” the fight while the other feels defeated is never a win for the marriage. Winning occurs when both people feel they have been validated and are working together for a resolution for the issue.

In the end, that “normal” fight, where each person is trying to win, will significantly decrease due to the understanding that each partner has attained.

When a married couple mutually has the same goals for their relationship, they will each make it a priority to attain these goals. An important goal in any marriage is to have peace as a foundation in their relationship. When this goal is set, the couple is going to look to resolve their conflicts quickly and easily.

Another important goal in a good marriage is to attain the skills necessary to resolve conflicts. I use the term skills because that is what it takes. When human emotions erupt, as they will, one must have the skills to stay calm, be able to listen, and then have to skill set to come to a mutually satisfying resolution.

Ironically, these skills are not typically taught to people in school but are expected to occur in their upbringing. However, if the person did not have that type of role model how do they know how to do it? Simply, they do not! These skills must be learned and then applied on a daily basis.

Generally speaking, couples do not get to the point of exploding at one another in a few moments. It usually takes time to build up to such a place of interaction. That being said, one of the best ways to avoid arguing is to stop at the first sign of upset.
In other words, if your partner seems a bit irritated at something you did or said, instead of ignoring it or telling yourself you are right so it does not matter how they feel, pay attention to it. Address it immediately with your spouse so you can talk it through to a peaceful resolution.

Getting all the help you need for your marriage out of a simple article is not always possible. If you would like more one-on-one assistance from me, just fill out this contact form so I can help you and your marriage.